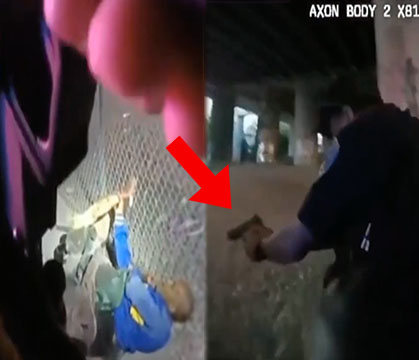 San Francisco, California At approximately 7:48 pm, the San Francisco Department of Emergency Management received a 911 call from a reporting witness stating that she saw maybe a houseless person with two large sticks…beating the crap out of…what looks like a shelter where someone else might be living. The witness took cellphone video footage, which captured the movement of shadows of the incident. At approximately 8:01 pm, two Bayview District Officers arrived on scene. Officers observed two subjects Michael Macfhionghain and Rafael Mendoza on the ground next to a brown tarp, which was located behind a low concrete and steel wall, underneath the freeway overpass. Both subjects were lying next to each other on the ground in an active physical struggle involving a knife. Macfhionghain held a knife in his right hand with the blade pointed downward over Mendoza. Mendoza, who was laying on his back, used his right hand to hold onto the right wrist of Macfhionghain. As the Officers approached the subjects, Mendoza told the Officers, He got me right there, and I cant breathe, which can be heard on the Officers body worn cameras. Macfhionghain told the Officer, This man…repeatedly attacking me, which can also be heard on the Officers body worn cameras. The Officers gave Macfhionghain numerous commands to drop the knife. An Officer drew his Department issued firearm and held it in front of him while he spoke with both subjects. The Officer told Macfhionghain he believed Mendoza had attacked him. The Officer asked Macfhionghain to drop the knife so that he could help him. Posted by JR

Sam Jay Made the Most of the Pandemic With 'Pause,' 'Bust Down'

Is Kiki Passo On TikTok? Tommy Paul’s Girlfriend and Partner…

5 Letter Words With LAC In The Middle, Start, End…